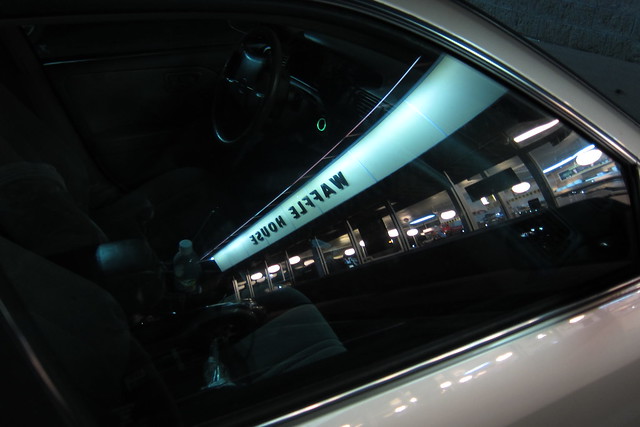 Had I never lived in the Mid-Atlantic, I would’ve never developed a proper appreciation for Waffle House.

While I’ve eaten there several times – the last time between Christina’s shift and mine behind the wheel of a rented cargo truck on the morning we moved her stuff from Virginia to New York – I certainly don’t carry a torch for their food.

Instead, I find myself pretty consistently in awe of other parts of their business model. Their plate marking system is a remarkably economic form of workflow management. The Waffle House index is a real FEMA scale for evaluating the severity of damage from a natural disaster.

And today, I picked up this piece in the Atlantic CityLab on their iconic architecture, interior design, and typography – and how a new location on Canal Street in New Orleans is slated to diverge from it by replacing the “ubiquitous yellow band” with “a ‘bistro courtyard’ encircled by a wrought-iron fence,” “stucco and brownish brick on the outside, and a gate next to the parking lot.”

I would say that consistency is more important than cleverness. Consistency is actually really hard to achieve. Cleverness is a cheap commodity.

You get distinctiveness by doing anything. Then if you wanted to make it memorable and appropriate, making that point of distinction plausibly mean something is the next step.

That distinction, in the case of Waffle House, probably has a lot to do with this (from this Journal article):

The Waffle House, which spends almost nothing on advertising, has built a marketing strategy around the goodwill gained from being open when customers are most desperate.

Though I have not been affected by natural disasters these last ten years, those eleven yellow tiles hovering in the air at the turnpike’s edge have come to mean a lot to me – and it would seem to other people too. It meant (among other things) that on a Saturday morning as I’d had a two-hour nap and Christina’s alertness was fading, we knew where we could stop for a cheap, hot breakfast – two more hours till we arrived in the future.